East Central Europe vol. 45 no. 1 has been published 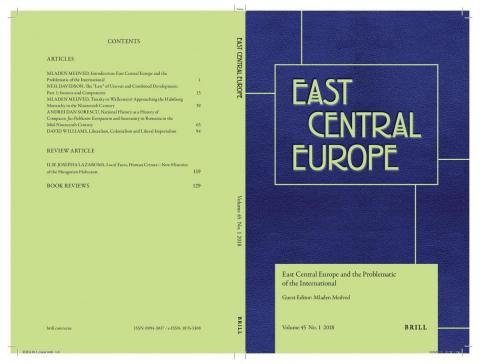 See more on the ECE page, as well as on Brill's page.

Introduction. East Central Europe and the Problematic of the International
By: Mladen Medved - see in the attachment
The “Law” of Uneven and Combined Development: Part 1. Sources and Components
By: Neil Davidson
Trotsky or Wallerstein? Approaching the Habsburg Monarchy in the Nineteenth Century
By: Mladen Medved
National History as a History of Compacts. Jus Publicum Europaeum and Suzerainty in Romania in the Mid-Nineteenth Century
By: Andrei Dan Sorescu
Liberalism, Colonialism and Liberal Imperialism
By: David Williams

Book Reviews
Another Hungary: The Nineteenth-Century Provinces in Eight Lives, written by Nemes, Robert
By: Ágoston Berecz
The Great Departure: Mass Migration from Eastern Europe and the Making of the Free World, written by Zahra, Tara
By: Kristina E. Poznan
The Rise and Fall of Belarusian Nationalism, 1906–1931, written by Rudling, Per Anders
By: Catherine Gibson
Zionists in Interwar Czechoslovakia: Minority Nationalism and the Politics of Belonging, written by Lichtenstein, Tatjana
By: Jan Rybak